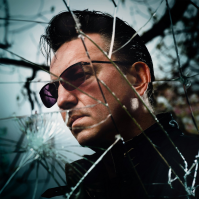 Following the success of his hugely acclaimed 2012 album, Standing At The Sky’s Edge, Richard Hawley will release his eighth studio album, Hollow Meadows on September 11th, via Parlophone Records.

Recorded at Sheffield’s Yellow Arch Studio in spring 2015, Hollow Meadows sees Hawley return to the classic, sophisticated songwriting and subtle arrangements that made him so widely loved and revered in the first place.

Meditating on such themes as ageing, fallibility and relationships, much of the album shares a brooding, yet wistful and romantic atmosphere in keeping with early albums Late Night Final and Lowedges, as well as touches of 2009’s Truelove’s Gutter (‘Nothing Like A Friend’) and Standing At The Sky’s Edge (‘Which Way’, ‘Welcome The Sun’).