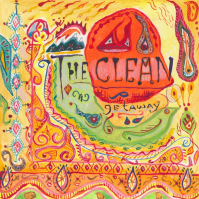 2001’s Getaway maybe best illustrates whatever mercurial, inexplicable musical power animates The Clean. After the band’s initial rush of activity between 1978 and 1982, the trio lay dormant until the end of the ’80s, when a string of reunion shows inspired the Kilgours and Scott to start recording again. After three well-received albums in the first half of the nineties—1990’s Vehicle, 1994’s Modern Rock, and 1996’s Unknown Country—The Clean disappeared again until the end of the decade, when another tour inspired another record. Speed and spontaneity defined Getaway. Robert says, “I remember writing ‘Silence or Something Else’ while the others went for a long walk. It was done by the time they got back. I probably would have gone for a straighter version, but I still like it.” David remembers, “Hamish wrote the instrumental ‘Jala’ in about five minutes in a motel outside of Turangi.” At one point in the process, Yo La Tengo’s Ira Kaplan and Georgia Hubley were visiting from America, and they ended up on the record too. A live version of the pulsing, soaring Stars—along with a couple of other Getaway songs and Clean classics like Fish, Side On, Quickstep, and Point That Thing Somewhere Else—appear on the rare 2003 album Syd’s Pink Wiring System. That record is included with the Getaway reissue, along with the more experimental, pianodriven EP Slush Fund, from the same era. These bonus tracks reinforce the idea of the Getaway-era Clean as especially plugged in, generating inspired and beautiful music almost on instinct.