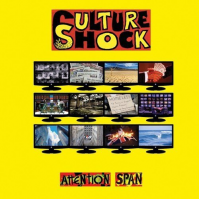 First new recording in 25 years from band featuring Subhumans and Citizen Fish personnel. Reformed in 2013 and performing since then. Vinyl includes digital download code. In between Subhumans (UK) and Citizen Fish, Dick Lucas fronted Culture Shock. Short-lived and influential as hell, the innovators of ska-punk-dub-reggae are at their best with Attention Span, their first recording in 25 years! Culture Shock began in England in 1986, soon after the Subhumans broke up, and ended three albums and three years later. Showing the progression from Subhumans to Lucas's early blueprints for Citizen Fish, Culture Shock is a transitional band just like Ian MacKaye s Embrace is the missing link between Minor Threat and Fugazi. The lineup remains almost the same, with original members Bill (drums), Jasper Patterson (bass, also original Citizen Fish member) and Lucas (vocals) joined by Alex Gordon (also from Citizen Fish) on guitar. Lucas s lyrics are primarily concerned with social and political issues, including the awareness of animal cruelty and social alienation. The songs are far from angry rants they often highlight a perspective of positivity and empowerment. Attention Span follows the success of their 2012 release, Everything (a collection of their three albums and demos), which ignited the band's full reformation. They have been playing live again since 2013. Attention Span delivers a blend of ska, punk, dub and reggae that appeals to sing-along music fans and provides a glimpse at the struggles of modern life. Two fine examples are the opening track, Visibility, which explores the illusions of internet privacy and social media-ocrity, and What Have We Got To Hide, a clever take on Big Brother paranoia. Since their rebirth in 2013, Culture Shock has evolved with the times, gaining new depth while staying true to the sound that made them so important since day one.