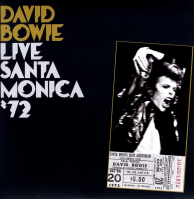 Double 180 Gram Vinyl. In 1972, David Bowie set out on his first US tour. He'd recently introduced the world to his Ziggy Stardust persona with his top 5 album 'The Rise and Fall of Ziggy Stardust and the Spiders from Mars' and had completed a hugely successful UK tour. The Santa Monica concert, David's first live US radio broadcast, was aired live on KMET in L.A. Over the last 36 years this historic recording has only been occasionally available as a bootleg. For many, ownership of this concert was regarded as a true test of being a 'proper Bowie fan'. This powerful, galvanizing show allows a more than 70 minute glimpse into the earliest nationwide live radio exposure granted David and the Spiders. The set list is compiled primarily from the 'Hunky Dory' and 'Ziggy Stardust' albums and features two covers, Jacques Brel's 'My Death' and the Velvet Underground's 'Waiting for the Man,' alongside the awesome power of 'The Man Who Sold The World' centrepiece 'The Width Of A Circle' (this version is a ten and a half minute sonic assault) and an 'Aladdin Sane' previewing 'The Jean Genie.' The set list is also quite different from the Ziggy terminating 'Ziggy Stardust - The Motion Picture Soundtrack. Accompanying David was The Spiders From Mars Mick Ronson - guitar, vocals, Trevor Bolder - bass, Mick 'Woody' Woodmansey - drums and Mike Garson - piano