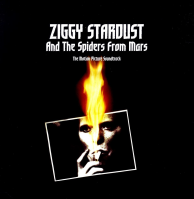 Ziggy Stardust And The Spiders From Mars (The Motion Picture Soundtrack)

Double 180 Gram Vinyl. 'Ziggy Stardust The Motion Picture' is a live album by David Bowie, corresponding to the film of the same name. The music was recorded at the Hammersmith Odeon in London on 3 July 1973, although the album was not issued by RCA Records until 1983. This is nearly the complete goodbye concert and earns it's place in rock history. How many other artists create an alter ego and how many reach the greatness of this strange, red haired alien? The set list has considerable overlap with the 'Santa Monica '72' album because of the focus on the 'Ziggy Stardust' studio album but this also draws on the 'Aladdin Sane' album.