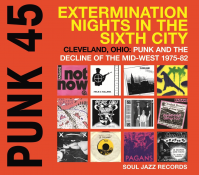 Punk 45: Extermination Nights in the Sixth City - Cleveland, Ohio: Punk and The Decline of the Mid-West 1975-82

Soul Jazz Records' new 'Punk 45' album charts the rise of underground punk in the mid-west city of Cleveland, Ohio, which for many people is the true birthplace of punk music in the mid-1970s.

Featuring a fantastic collection of punk 45 singles from Cleveland groups including Pere Ubu, electric eels, The Pagans, Rockets From The Tomb, Mirrors, X-X and more.

The album follows on from Soul Jazz Records' earlier Punk 45 albums about USA and British punk (Kill The Hippies! Kill Yourself! and There Is No Such Thing As Society) as well as the cover art book Punk 45. Extermination Nights in the Sixth City coincides with the release of as a second album about Ohio's early punk scene, Burn, Rubber City, Burn - featuring the music scene of nearby Akron.