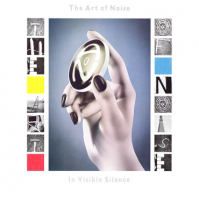 The Art of Noise first appeared in 1983 with a song in their heart, a beat in their soul, and an ignition key in their hand. Formed at a time when the reverberations of punk, post-punk and new wave could still be felt, they were determined to be a different kind of group, a group that set themselves outside the then currents of fashion and style, a group that were the missing link between The Monkees and Talking Heads, Abba and Kraftwerk, Frank Zappa and The Archies. Their unique sounding instrumental compositions relied heavily on the innovative use of digital samples and computers to create their famous sound collages. Their first China album, In Visible Silence has been newly remastered and expanded with unreleased recordings taken from the original album sessions, single versions, and a multitude of mixes – some available on CD for the very first time. The first disc in the Deluxe Edition includes the remastered original album coupled with ‘The Singles’: all the original A-sides and B-sides, including – for the first time ever on CD – the fan favourite Hoops and Mallets and an unreleased version of Backbeat, originally recorded for the 12" of Paranoimia. The second disc takes a look back at the recording sessions with The Making Of...: eleven previously unreleased tracks from the cutting room floor. This is the first time any outtake material from this era of Art of Noise has ever been released. Also included on Disc Two is The Mixes Stop Here! all of the 12" mixes from the In Visible Silence project, several of which - including the rare Last Leg Mix of Legs - are previously unreleased on CD.