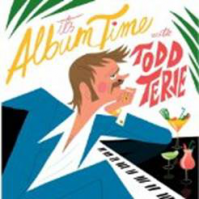 Oslo disco-dance champ, DJ and producer Todd Terje finally releases his debut long-player 'It's Album Time' via his own Olsen Records. Terje presents 12 of his works known and unknown. Ever since Todd dropped 'Eurodans' back in 2005 he's had many a beady disco eye trained in his direction. His grooves are effortless and his melodies infectious!

Here he puts all his experience and nordic sense of fun into twelve tracks of straight up home listening pleasure. It comes packing the huge 'Strandbar' and 'Inspector Norse' tracks, it's got a guest spot from Bryan Ferry on a version of Robert Palmer's 'Johnny and Mary' and in between all that, it jumps for joy around his own lit-up balearic world. With killer artwork from illustrator Bendik Kaltenborn this is one solid debut and one that's sure to feature throughout 2014. Training to become a pianist Terje Olsen (as he was originally called) enrolled at a local music school, but to his disappointment there wasnâ€™t much jazz being taught there. Gradually leaving the musical career path, he later moved on to study physics at the University of Oslo. Growing up in the rural village of MjÃ¸ndalen, dance music influences were scarce. However, during the early/mid nineties dance culture sneaked it way into even the most remote parts of Norway, thanks to The Prodigy and national radio stations filling prime time slots with underground jocks Olle Abstract and PÃ¥l â€œStrangefruitâ€ Nyhus from Mungolian Jetset. Inspired by an older generation of UK disco heads, Terje soon began to make his own re-edits of old disco records and moved on to his own productions...