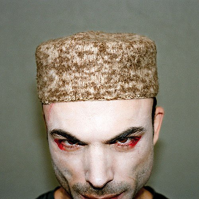 Year after year, Joakim has gathered experiences that confirm his global vision of music and explored many facets of the musical spectrum: a musician with five albums under his belt; an outstanding DJ with a huge musical spectrum; a label founder and manager (Tigersushi and the recent vinyl-only Crowdspacer imprint); a self-taught graphic designer (he designs his record covers and most of the label’s artworks); a producer (for (!!! Chk Chk Chk, Juveniles, Zombie Zombie, Poni Hoax…); a high-profile remixer (Antena, Charlotte Gainsbourg, Todd Terje etc…); a fashion enthusiast (he launched Tigersushi Furs with his cousin); a sound designer for catwalks (Chanel, Margiela, Balenciaga); and a step into contemporary art, working on Camille Henrot's installations and videos (who won the Silver Lion at the 2013 Venice Biennale with the video Grosse Fatigue) or making his own sound installations (Gwangju Biennale in 2014 curated by Jessica Morgan). Samurai is influenced by Joakim’s journeys through New York, Paris and Tokyo and draws from a wide range of inspirations including new age music and Yukio Mishima’s critical writings on the famous spiritual Samurai text Hagakure.