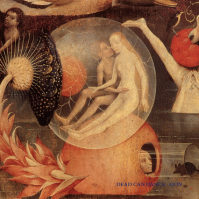 With the industrial textures of their eponymous debut behind them, the fifth album from Dead Can Dance (Aion, released in 1990) is perhaps the most focused and concise of their albums. Predominately recorded at their own studio in Southern Ireland and featuring guest vocals from soprano David Navarro Sust to add to Brendan and Lisa’s opposing yet complimentary styles, the Middle Ages and the early Renaissance are a core influence; an atmosphere amplified by the album’s cover, a section from the Earth phase of Dutch painter Hieronymus Bosch's triptych, The Garden of Earthly Delights