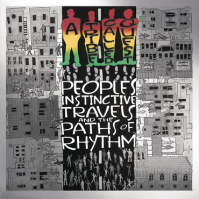 25th Anniversary edition in mirror board sleeve with three extra mixers from Pharrell, J Cole and Cee Lo. It was on April 17, back in 1990, that A Tribe Called Quest released their truly unique debut People’s Instinctive Travels and the Paths of Rhythm on Jive Records. Full of playful humour, abstract musings, teenage tales, social commentary, and distinctive production, the album channels and touches in on a spectrum of sentiments and feeling. From such odes to adolescence as Bonita Applebum and I Left My Wallet in El Segundo to the philosophical leanings of tracks like Push It Along and Footprints, and the conscious themes of Description of a Fool and Luck of Lucien, Tribe were undeniably youthful old souls. The remarkably experimental album (just dig the dawn-of-the-universe-esque intro) kicked off what was to become one of the most inspiring and influential careers in hip-hop. So many musicians and fans cite A Tribe Called Quest as their very favourite group that it is hard to imagine what the musical landscape might look like without their contribution