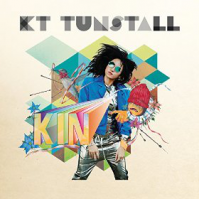 KT Tunstall returns with an explosive 11 track collection of songs on her fifth studio album 'Kin'. Two years ago, KT Tunstall thought she was done with music "As an artist I feel like I died," she says. "I stopped. I gave up. I didn't want to do it anymore." She put her stuff in storage and bought a little house in Venice Beach, California and enrolled in the Sundance Institute's elite Film Composers Lab. It was a turning point in her life. Two years later 'Kin' was born. Produced by Tony Hoffer (Beck, Fitz and the Tantrums, Air, M83 and more), and written and recorded by KT in LA, it exemplifies the very best of guitar pop. "The truth is, I've finally made peace with being a pop songwriter," KT says. "This record was very much embracing my dharma as an artist, which is to write positive songs that have muscle, but also show their vulnerability.It has been over ten years since KT released her multi-platinum debut, 'Eye To The Telescope', and in 'Kin', KT sees its full bodied and blooded follow up. The album's new focused sound is exemplified by the teaser track 'Evil Eye' a stripped back, primal rock 'n' roll track that seeded the whole record. The album's lead single 'Maybe It's A Good Thing' shows KT in top form a moment in life captured in a bright, powerful pop song with an irresistible and unforgettable melody. The diverse collection also includes a duet with KT fan James Bay, the raucous rebellion of 'It Took Me So Long To Get Here, But Here I Am', 'Run On Home', the call to arms of 'Hard Girls', and the beautiful album closer 'Love Is An Ocean'.