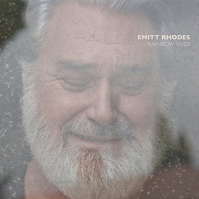 First new release in over 4 decades. After connecting with producer Chris Price in 2013, Rhodes revived his home studio with help from Price and an all-star band, all of whom had been enamored of Rhodes' work Roger Joseph Manning Jr. and Jason Falkner (both solo artists, members of Jellyfish, and currently in Beck's studio and touring band), indie producer and musician Fernando Perdomo, Rooney's Taylor Locke and New Pornographers' drummer Joe Seiders. They would cut the new record live in that space. More special guests appeared to make this momentous release even more special Aimee Mann, Susanna Hoffs (Bangles), composer and producer Jon Brion, Wilco's Nels Cline and Pat Sansone, Bleu, and Probyn Gregory and Nelson Bragg from Brain Wilson's band, among others. What was achieved is more than what folks thought would ever happen. They made Emitt's first full-length in more than four decades. 'Rainbow Ends' is the album generations have been waiting for. Eleven new tracks for longtime fans who'd held onto their out-of-print ABC albums, for those who found out about Rhodes via 'Lullaby' being featured in The Royal Tennenbaums, and for the uninitiated who'd heard their favorite artists and friends rave about his small, but truly vital and influential catalog.