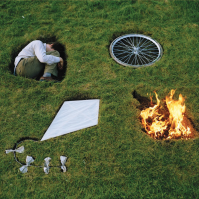 Ever since Nirvana performed their famous MTV unplugged, going acoustic has become a ritual for every rock band. Most of them only stripped the electricity away and played the songs in the exact same way with acoustic guitars. A no-brainer for Girls In Hawaii, real craftsmen when it comes to arranging songs. The band has explored acoustic territories before. When invited for a one-off show at Le Botanique, they rehearsed for 8 days straight and reshaped more than 10 of their songs. By reinventing the tracks, using crystal glasses, an Indian harmonium and brass instruments, every member of the band pushed their instrumental skills even further. Everest, their latest record to date, faced critical acclaim and was coined as a perfect balance between romanticism and depth like some sort of newly acquired serenity seized upon inner demons. Former wounds may remain but the band rose again, step by step, through its worldwide tour during which they performed in China, England, Germany, Austria, Italy, Netherlands and even Iceland. France, Switzerland and their homeland of Belgium, prime advocates of the band from the early days, were the first to fervently welcome the Girls back. It took the writing of a new album, its recording and a year-long tour for them to arise from ashes. And a new desire grew during those days to rework their catalogue, to revise it entirely for more intimate venues. A tour in seated venues, a close attention to the smallest details, distinct amplification techniques along with ever-inventing visuals and above all new unusual instruments. Summer 2014 was busy with its lot of unforgettable performances such as Les Vieilles Charrues, Paleo, Sziget, Dour and many others. But what is said won’t be left undone. Starting mid-September, the band will lock themselves within their rehearsal premises for a full month of intense creation… It is tough to say as of now what this new production will turn into but everything leads to believing that it is shaping towards a turning point in Girls In Hawaii’s career.