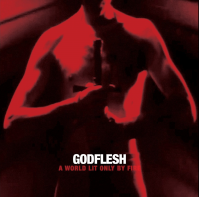 A World Lit Only By Fire

The first new long player from GODFLESH since 2001's 'Hymns' which saw the band implode and then eventually split up following it's release. The band reformed in early 2010, and has gone on to play many renowned festivals worldwide coupled with minimal but solid touring. Since the reformation new material has slowly but very surely been both discussed and worked on, although Justin K Broadrick stated that the eagerness to release new music should not be overcome by the bands new found popularity. This album, like the 'Decline & Fall' EP that came before it, have been works in progress for almost 2 years. "The music speaks entirely for itself, this is pure Godflesh, as the concept was originally intended; minimal, brutal, dissonant, driven by machines yet paradoxically dominated by organic and harsh down tuned guitars and bass, clean dub inflected vocals offset against harsh raging minimal shouts, and this is not to forget the worship of the omnipresent groove. Although the band could now be considered mature, and often with this maturity comes peace, this album has been perceived as the most aggressive and consistently fierce release in the band's career, something that the band are very proud of."