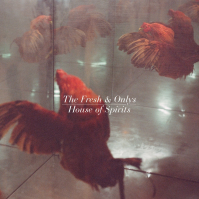 With surreal nightmares, glistening pop tempered by sinister undertones and even unsettling experimentalism, The Fresh & Onlys fifth album, House of Spirits is the San Francisco quartets most focused and most experimental yet. The material gestated during vocalist Tim Cohens isolated stay on an Arizonan horse ranch where he documented dreams in a bedside notebook. The resultant songs are by turns pristine, feverish, and bizarre, as The Fresh & Onlys returned to Lucky Cat Studios in San Francisco with Phil Manley (Trans Am) to recast the textures, leaps of logic and evocative character of Cohens dreams into songs.