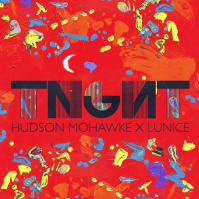 Rising DJs/producers Hudson Mohawke and Lunice join forces as TNGHT, to release their debut self-titled collaborative EP. As a first listen, the pair have released the track â€œBuggâ€™nâ€. Its unceasing levels of bass are enough to crack pavement, but the duo load it up even further with random, quirky studio effects, from chimes and echoes to, perhaps most disheartening of all, the coo of a baby. It should, as the title indicates, be enough of a sonic assault to have you trippinâ€™ in your seat.