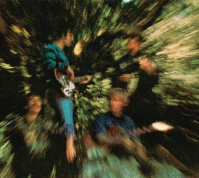 Opening slowly with the dark, swampy "Born on the Bayou," Bayou Country reveals an assured Creedence Clearwater Revival, a band that has found its voice between their first and second album. It's not just that "Born on the Bayou" announces that CCR has discovered its sound -- it reveals the extent of John Fogerty's myth-making. With this song, he sketches out his persona it makes him sound as if he crawled out of the backwoods of Louisiana instead of being a native San Franciscan. He carries this illusion throughout the record, through the ominous meanderings of "Graveyard Train" through the stoked cover of "Good Golly Miss Molly" to "Keep on Chooglin'," which rides out a southern-fried groove for nearly eight minutes. At the heart of Bayou Country, as well as Fogerty's myth and Creedence's entire career, is "Proud Mary." A riverboat tale where the narrator leaves a good job in the city for a life rolling down the river, the song is filled with details that ring so true that it feels autobiographical. The lyric is married to music that is utterly unique yet curiously timeless, blending rockabilly, country, and Stax R&B into something utterly distinctive and addictive. "Proud Mary" is the emotional fulcrum at the center of Fogerty's seductive imaginary Americana, and while it's the best song here, his other songs are no slouch, either. "Born on the Bayou" is a magnificent piece of swamp-rock, "Penthouse Pauper" is a first-rate rocker with the angry undertow apparent on "Porterville" and "Bootleg" is a minor masterpiece, thanks to its tough acoustic foundation, sterling guitar work, and clever story. All the songs add up to a superb statement of purpose, a record that captures Creedence Clearwater Revival's muscular, spare, deceptively simple sound as an evocative portrait of America.