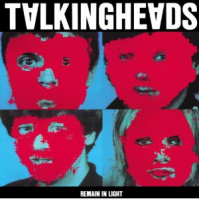 "Remain In Light", Talking Heads fourth album is hailed by most as their best, and it's easy to see why. Eno was handed complete production control, and he started to experiment with tape loops, and other sonic gadgetry. There is a distinct African influence throughout (as hinted on "Fear Of Music"). First track "Born Under Punches" utilises the tape-looped edit to maximum effect, and produces an awesome wonky afro disco groove, which is still deadly on a dancefloor. Also included on this album is what is probably their biggest track to date "Once In A Lifetime", it was this track, accompanied by MTV worthy 'weird video' that catapulted the band to worldwide recognition. Bolstered by other classics such as "Crosseyed And Painless", "Houses In Motion" and "Seen And Not Seen", this is definitely one to own. Essential!