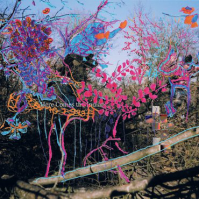 At the beginning there were two of them - Avey Tare and Panda Bear - banging drums and tweaking synths in their bedrooms, singing strange and sometimes heartbreaking songs about imaginary friends and childhood pets. Carried along by washes of squalling feedback, the music was noisy, and it was weird, but it was, at heart, pop music. This was the start of Animal Collective. For fifteen years Dave Porter (Tare), Noah Lennox (Bear), Brian Geologis Weitz and Josh Deakin Dibb have been rewriting the musical map, their line-up and aesthetic shifting with each astonishing release as they continue their pursuit of a new psychedelia. Their wild path has taken them from cramped concrete basement shows and forest floor singalongs to immersive installations at the Guggenheim and performances to millions on national television. So where now from here? Here Comes The Indian is the fifth full length album, and first to include all four members of Animal Collective (Avey Tare, Panda Bear, Geologist and Deakin). It was recorded over a few days in Brooklyn in 2002 at Rare Book Room Studios with Nicolas Vernhes. Additional overdubs were done at Avey#s apartment that same year. Here Comes The Indian was also the first album to use the name Animal Collective and the first release on Paw Tracks. It was originally released on Paw Tracks in 2003 as PAW1.