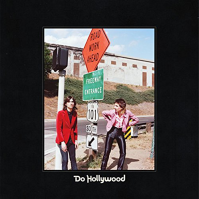 Limited pre orders on the vinyl will get a 7" with 'These Words\' and 'As Long As We're Together' on it. 'Do Hollywood' is the eagerly anticipated debut album from brothers Brian (19) and Michael (17) D'Addario. Hailing from Long Island, NY, Brian and Michael have been playing rock music since they were old enough to walk and talk, mastering every instrument they could get their hands on and writing and performing everything together (they alternate writing credits and instruments on 'Do Hollywood'). Recorded in Los Angeles, CA, with production by Jonathan Rado of Foxygen, they mine inspiration from every era of rock, crafting richly sophisticated baroque-pop songs into a ten-track tour de force. Imagine a modern-day band combining the melodic, harmony-rich soft rock of Wings and Supertramp, the underground cool of Big Star and the Ramones, and the theatricality of Broadway musicals. Now imagine them being led by instrument-swapping teenage brothers with an extreme 1970s fashion aesthetic, and you have the Lemon Twigs. LP - With Download.