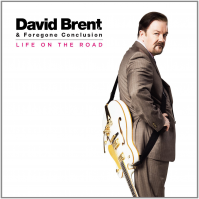 Life on the Road

'Life On The Road' is the debut album by David Brent and Foregone Conclusion. David Brent is the character created and made world famous by Ricky Gervais as part of his ground breaking, award winning BBC2 comedy 'The Office'. The album is released in conjunction with the original motion picture David Brent Life On The Road. Directed, written by and starring Gervais, David Brent 'Life On The Road' sees a documentary crew catching up with David Brent twelve years on from 'The Office'. Brent is now a travelling salesman, chasing his dream of rock stardom by self-financing a UK tour with his band, 'Foregone Conclusion'. The accompanying album 'Life On The Road' includes songs composed by Gervais especially for the film and songs already familiar to fans including 'Free Love Freeway', 'Paris Nights', 'Spaceman' and 'Equality Street'. Produced by Gervais and Andy Burrows - a successful recording artist under his own name and formerly of Razorlight - 'Life On The Road' was recorded and mixed at Air Edel Studios in London by Nick Taylor.