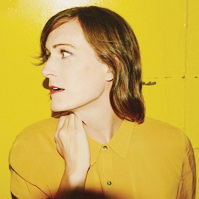 In late summer of 2014, following the release of her highly praised 2012 album 'La Grande', Laura Gibson packed her things and moved from Portland to New York to study Creative Writing and have some time away from music. For the first part of that journey she took the 'Empire Builder', a legendary train that connects the Pacific North West with Chicago. Just as she'd begun to feel settled, on March 26, 2015, her apartment building in the Lower East Side blew up from a gas explosion, killing two and injuring many. Laura was unharmed, but lost almost all that she owned and had been working on. All identification, musical instruments, stacks of notebooks, and every word she had written in the past several years was reduced to a pile of rubble. She spent the next few months rebuilding her life, bouncing between friends' couches and guest rooms, and finishing her second semester, and all the while rewriting the lyrics she had lost, a recovery made possible by the help and support from hundreds of friends, fans, and strangers. Now, she presents her new album, aptly titled 'Empire Builder', and released through City Slang.