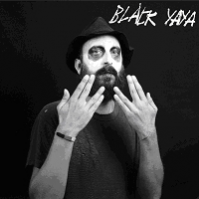 David Ivar aka Black Yaya is a new singer and a new songwriter, although he’s not new to the world of singer-songwriters. Indeed, he used to write, record and perform under the name Herman Dune. He travelled the seven seas and beyond with Herman Dune, and recorded more than ten albums with this name.

One morning in November of 2012, David Ivar woke up with the strange feeling that he could not be in a band anymore, at least for the moment. For „Black Yaya“. David Ivar wanted to go back to recording everything himself, far from the recording facilities he had got used to with Herman Dune. He wanted to feel like he had when he was using four track tape recorders in High School, free to try anything with no pressure in terms of time spent working, or cost. His heroes were Chuck Berry, Bob Dylan and John Lennon he loved them with all his heart, he loved them more than anything in the world, they were singers, writers and guitar players, and that was all he cared for...