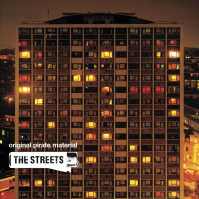 In a thrilling UK Garage scene, blighted only by a reliance on drippy soul clichÃ© and tiresome braggadocio, The Streets' eminently quotable Mike Skinner may just be the voice to take it to the next level with Original Pirate Material. This debut is a staggeringly eloquent and fearlessly honest snapshot of gritty street-level existence, as experienced by an ordinary bloke. At first listen, the Birmingham-born Skinner's cheeky cockney affectations grate slightly. But for every line that makes you squirm, there's 20 that drop your jaw. "Has It Come To This?" is "A day in the life of a geezer", a seductive encapsulation of London lifestyle, presented raw as a bootleg, but bulging with sharp wit and feverish detail. "Stay Positive" weaves a fearful tale of heroin addiction, Skinner sneering "I ain't no preaching fucker/ An' I ain't no do-goodie-goodie either/ This is when shit goes pear-shaped". And "The Irony of It All" presents a beguiling case for legalisation, presenting a fictional exchange between a beered-up, self-righteous lager lout and a fey student weed enthusiast. Original Pirate Material is a milestone, the real voice of British youth set down on record. Don't miss this.