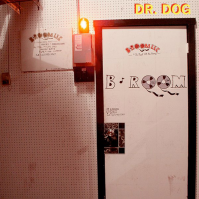 Dr Dogâ€™s third studio album on Anti, â€˜B-Roomâ€™, marks the bandâ€™s greatest point of clarity in more than a decade of performing and recording. Their arrangements, while still ambitious, are much simpler, moving past the multi-tracked pastiche of earlier efforts into a unique and vibrant band voice. Indeed, it is this discovery of the band-collective as a compositional tool that makes â€˜B-Roomâ€™ the most cohesive, soulful, loose, and plain fun record of their career.

The title of â€˜B-Roomâ€™ references the bands newly built studio, an integral part of making the new album; the band built the new studio themselves, from the studs to the sheet rock to the recording booth. As Leaman now understands, making a record is a lot like doing construction. Both require a similar amount of frustration, intensity, and cohesion. By building the space first and releasing all of that emotion, the band was then free to engage in their creative process without the expectation or preconception that they admittedly had brought into other sessions.

Recording many of the albumâ€™s tracks as live takes, Dr Dog discovered the soul roots always inherent in their Philadelphia background. â€˜The Truthâ€™, the Gamble and Huff inspired track that opens the album, is only the most obvious manifestation; on songs like â€˜Minding The Usherâ€™ and â€˜Loveâ€™ the spontaneity of the bandâ€™s live performances seamlessly fuses with the intricacy of their kaleidoscopic composition. From the construction of the studio to the recording of the album that took place within its walls, the band has found that boundless moment of creativity where their spirit and soul coexist.