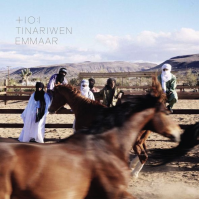 Hugely celebrated and acclaimed, Tinariwen released their debut album, ‘The Radio Tisdas Sessions’ in 2001, and over the past decade they have continually toured the world, picking up some of the most respected music awards, including a BBC Award for World Music in 2005, the prestigious Praetorius Music Prize in Germany in 2008, the Uncut Music Award in 2009 for ‘Imidiwan: Companions’ and, most recently, a Grammy for their 2011 album ‘Tassili’.

‘Emmaar’ was recorded in the Joshua Tree desert, California, due to political instability in their country - the first time the band have recorded away from their homeland. “It still had to be recorded in a desert,” says bassist Eyadou Ag Leche. “We would like to live in peace in the North of Mali, but this is very difficult, there is no administration, no banks, no food, no gas. Joshua Tree is in the high desert of California, we love all the desert, these are places where we feel good to live and to create.”

Recorded over three weeks in a home studio, ‘Emmaar’ has a distinctly organic feel. “We weren’t in a proper studio or outside in the desert like ‘Tassili’,” Ag Leche says. “We built a studio in a big house in Joshua Tree. Everybody in the same room, with no separation. We wanted something which sounded natural and live.”