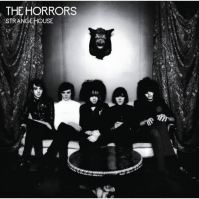 Re-issue of the UK Top 40 debut album from The Horrors, 'Strange House'; this was their only Polydor release before they signed to XL Records. The opening track is a cover of Screaming Lord Such's 'Jack The Ripper' and the album features the track 'Sheena Is a Parasite'; directed by Chris Cunningham and starring Samantha Morton the video was controversially banned by MTV. Featuring all 11 tracks from the initial pressing this will also include a bonus 7" with the tracks 'Death At The Chapel' and for the first time on vinyl 'The Horrors Theme'.