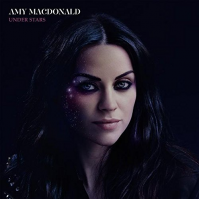 Good things come to those who wait…. and such is the case with the fourth album from multiplatinum selling singer-songwriter Amy Macdonald. Eleven brand new songs written and recorded in the Summer of 2016 and now set for release on February 17th 2017. Following two sell-out “underplay” shows in London and Glasgow in November 2016, Amy is beyond excited to announce a full UK Tour for 2017 – including her first ever show at the Royal Albert Hall – and of course the release of “Under Stars”. Available to pre-order now, the superb new album is available on CD & vinyl with eleven tracks, plus a Deluxe CD version with eight acoustic tracks, record at RAK Studios in London - one of which is her superb take on the Bruce Springsteen song “I’m On Fire”. The acoustic version of “Down By The Water” is available as an “Instant Grat” track when you order the album digitally.
Standard CD – Jewel Case, eight page booklet with lyrics, full colour artwork throughout, 11 tracks, one disc