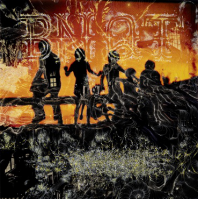 BNQT, a new indie super-group conceived and led by Eric Pulido of Midlake release their debut album Volume 1 via Bella Union. The introductory set includes ten new, original songs and features five vocalists - Ben Bridwell of Band of Horses, Alex Kapranos of Franz Ferdinand, Fran Healy of Travis, Jason Lytle of Grandaddy, and Pulido - who wrote and sing two tracks each, with backing from other Midlake members McKenzie Smith (drums), Joey McClellan (guitar) and Jesse Chandler (keys). Volume 1 was recorded and produced mostly at their studio in Denton, Texas. The concept of BNQT (pronounced “Banquet”) came to Pulido while touring Midlake's 2013 release, Antiphon. Gathering a number of contrasting yet complementary artists he’d befriended or shared the stage with, Pulido set out to establish an environment in which they could collaborate: “That's what art is about for me,” Pulido says, “creating with other people that you love and appreciate.” The idea for BNQT was enthusiastically embraced by all involved, but with the artists stretched across the globe, recordings were split both with travel to Denton and remotely over the net. Over a year and some change, songs grew from demos to fully realized recordings, with Pulido guiding the way, and encouraging the artists to stretch out into new, uncharted territory. The resulting work is full of surprises, a collection that feels oddly familiar and attractively alien.