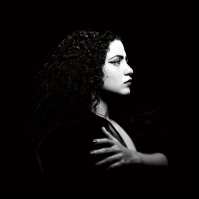 Emel Mathlouthi (Emel) releases her sophomore album, Ensen via Partisan. Emel rose to prominence after her 2007 recording Kelmti Horra (My Word Is Free) became a viral anthem during the Arab Spring, earning her the title "voice of the Tunisian revolution" and eventually an invitation to perform at the 2015 Nobel Peace Prize ceremony. Her powerful, heartfelt music defies genres, melding together electronica, Tunisian textures and a cinematic universe. Combining the political and the personal, Emel expresses not just her feelings but those of so many people. "It is important to me to try to give voice to the silenced. I also believe, though, that art is its own message, that especially when you come from a repressive place, or an ignored place, the simple act of saying, 'Hey, I'm here,' is important - the art of presence and insistence." On her sophomore album, Ensen, Emel distills her blend of acoustic and electronic sounds into a style that's even more uniquely her own, citing Ben Frost, Samaris or James Blake as influences. With several producers, including Valgeir Sigurosson (Sigur Ros, Feist) and her main collaborator French / Tunisian producer Amine Metani, Emel recorded the new album across seven countries and two continents.