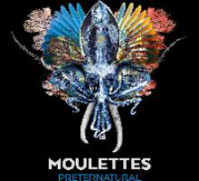 Moulettes are a Brighton based British band of Bjork, Frank Zappa and Gentle Giant loving multi-instrumentalists that weave in and out of several genres with 3 part harmony female vocals, amplified Cello, distorted Bassoon, Auto-Harp, Guitar, Drums, Bass and Synths into an incomparable alt.pop rock folk universe. Since the success of 'Constellations', Bajian Irish Londoner Raevennan Husbandes has joined the band on Vocals and Electric Guitar. With this new line-up the band have made their fourth Album 'Preternatural.' From Medieval Latin preternaturalis (mid-13c.), from Latin phrase praeter naturam (praeterque fatum) "beyond nature (and beyond fate)." In contrast to the supernatural, the dominion of deities, preternatural phenomena are... "suspended between the mundane and the miraculous in a domain of Wonder and Marvel. Strange specimens evoke questions about the natural order...they provoke the spirit of investigation. " 'Preternatural' is a word particularly subject to etymological metamorphosis, describing the phenomena that fall "between the known and the unknowable" ..."recognising that the areas of magic, religion, and science are fluid and that their intersections should continue to be explored, contextualised, and challenged."