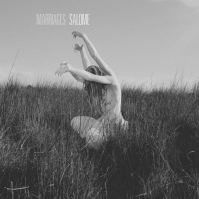 Debut full length featuring Emma Ruth Rundle (vocals, guitar), along with former Red Sparowes bandmate Greg Burns (bass, keyboards) and new drummer Andrew Clinco. First single "Skin" premiered on Stereogum, and posted by numerous notable outlets since. Early support/features confirmed with Pitchfork, The Guardian, Stereogum, Spin, AV Club, Consequence of Sound, Alarm, Pop Matters and more. Confirmed EU dates supporting Wovenhand in April 2015. // "Marriages are set to release their debut full-length, Salome, and it is a MASSIVE leap forward from Red Sparowes, from Kitsune, from Some Heavy Ocean. It's the best thing any of these guys has ever been involved with, and one of my favorite albums of early 2015." Stereogum // The first thing one notices about the full-length debut album by Marriages, Salome, is its sense of space. Like pulling open a dark window shade mid-flight, we're abruptly presented with a crystalline brightness setting the tone from the outset, signifying an evolution from the somewhat insular buzz of 2012 debut EP, Kitsune. The second thing is that, unlike the stream-of-consciousness approach which found each track on Kitsune nebulously flowing into the next, Salome is comprised of concise songs, each one a light that flickers into existence, burns with magnificent intensity, and then expires. The Los Angeles-based trio first began in 2011 as a collaborative effort between former Red Sparowes members Emma Ruth Rundle (guitar, vocals) and Greg Burns (bass, keyboards). Showcasing Rundle's exceptional playing more vividly than the dense architecture of the Sparowes could allow, Marriages' departure from purely instrumental rock, too, helped bring her to the forefront, revealing a voice equally fragile and ferocious. Enlisting Sparowes drummer Dave Clifford, they recorded Kitsune, released on Sargent House in 2012. Subsequent touring with Russian Circles, Deafheaven and others honed their vision while introducing the band to a broad cross-section of heavy music fans. Full time drummer Andrew Clinco completed the equation in late 2012, the final component in Marriages' frequently epic postpunk-by-way-of-stoner-rock sound. While the group busied themselves writing the songs that would become Salome, Rundle issued solo album Some Heavy Ocean in early 2014, earning praise from the likes of Pitchfork, NPR, etc. Promoting that record found her touring the US as direct support to King Buzzo of the Melvins, immediately after which Marriages set out on tour once more, this time with the legendary Boris. Salome is a timeless 9-song monolith of a debut LP. Propulsive, frequently iridescent, the compositions on the album are confident and evocative, the sound of a band focusing their strengths to great effect. Throwing open the curtains on not only their sound but on their songwriting as well, Rundle, Burns, and now Clinco seem perfectly at ease scaling anthemic peaks and heartbreaking valleys, often in a single song. Salome finds Marriages fully embracing their skill at crafting timeless songs with chillingly epic results.