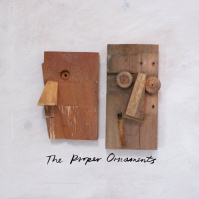 Mining the rich territories of The Velvet Underground and The Beach Boys, their debut album proper "Wooden Head" features fourteen thrillingly taut and melodic pop songs with a deep, dark undercurrent. Comprised of Argentinian Max Claps and James Hoare (also of Veronica Falls) â€“ who both sing and write the songs â€“ and joined by Daniel Nellis (bass) and Robert Syme (drums), the band have already shared stages with the likes of Real Estate, Woods, Crystal Stilts, Toy and Metronomy. Maximo Claps arrived in London in 2008 on a one-way ticket from Buenos Aires, aided by former Rolling Stones manager Andrew Loog Oldham. Oldham had produced a record by Claps' Argentinian band of the time but the group had fallen apart in a mess of drugs and acrimony and Claps' family were attempting to intervene by sending him to a mental hospital. The only option seemed to be to flee the country. As Claps recalls, "The day before flying to the UK I got run over by a car and had to escape hospital in order to make it so I arrived with bandages and my head all stitched up." A few weeks later Max walked into the vintage clothes shop where James Hoare sat behind the counter reading a book on The Velvet Underground, and attempted to cause a diversion while his kleptomaniac girlfriend stole a pair of boots. â€œShe didn't steal them in the end,â€ says Max. â€œThey weren't her sizeâ€. However, the shop assistant and the would-be accomplice bonded over a mutual love of the Velvets, Love, Felt and West Coast pop and began writing together, taking their name from a song by the pioneering soft psych band The Free Design. In 2010 they released their first single, "Recalling", following it up with a five-song EP for London label No Pain in Pop. In 2013 Lo Recordings released all their output to date on a collection titled "Waiting for the Summer", followed by the single â€œFirst Step Outâ€ in February 2014. Their new album was recorded at a studio in Hackney, as well as at home in their old flat in Whitechapel on a broken 8-track reel-to-reel bought off eBay from an angry guy who threatened to shoot them and chop off their balls when they attempted to return it - a terrifying experience for a pair of skinny indie boys. Taking inspiration from Berlin-era Lou Reed, Jesus and Mary Chainâ€™s â€œDarklandsâ€, The Television Personalities and West Coast Pop Art Experimental Band, the songs are breezy and easy on the ear, with sublime harmonies and chiming Byrdsian guitar, but with a darker twist and a pervasive air of melancholy. Stand-out tracks include the beautiful but sad â€œSummerâ€™s Goneâ€ (about mental illness), â€œMagazineâ€ (an upbeat number written from the perspective of a bullet in the barrel of a gun) and â€œYouâ€™ll Seeâ€ (about how when you die youâ€™ll see everyone you know, all there lined up in a row). With "Wooden Head", The Proper Ornaments prove that it is still possible to create an album of pure pop perfection. Max's girlfriend may not have stolen the boots, but The Proper Ornaments are about to steal your heart. â€œThe joint project of James and Max, through romantic drama that borders on that of The Libertines. And when you hear The Proper Ornaments youâ€™ll see why itâ€™s all worth it.'