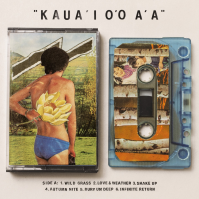 Following their recent signing to Fat Cat, KAUA'I O'O A'A sees Gentle Friendly step up a level with a fantastic new album, their first release in over two years. Punchy, restlessly energetic and densely-detailed, it is a cracking, insistent little record and - whilst it recalls the likes of early Animal Collective, Health and No Age - sounds like little else being made right now. Gentle Friendly are the London-based duo of David Maurice and Richard Manber, whose penchant for circular melodies, tidal fuzz and rapid junked rhythms is delivered via an austere instrumental setup of vocals, Casio MT-40 keyboard and drums (sometimes electronic), alongside an array of tapes and electronics. Since forming in 2008, they have released a steady sequence of singular and acclaimed recordings, forging a sound that "whilst informed by a rich tapestry of influences and a particular brand of Future Englishness - is instantly recognizable as their own".