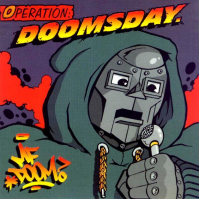 MF DOOM, he of many aliases and albums, has decided to look back to his 1999 debut as the masked villain, Operation: Doomsday, for a second time. You might recall that Stones Throw reissued the album last year as a double-CD in a lunchbox; yeah, it was pretty rad.

But now, DOOM is putting the album out for a third time, though now it's through his own Metal Face imprint. It's set to drop April 9 and will arrive as a remastered double-vinyl, which will be Gun Metal colored.