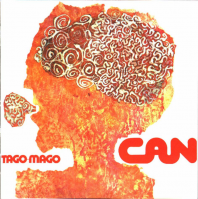 Canâ€™s Tago Mago, their first proper album with iconic frontman Damo Suzuki, is one of those albums that never stops being talked about, because with every new wave of artists that comes, there is a clean Can influence on some of them, and mostly directly from this album. Itâ€™s hard to believe that itâ€™s going to be 40 years old this year, but itâ€™s true and in order to celebrate Spoon Records and Mute are putting out a deluxe reissue.
The package comes with the original UK artwork (seen above), a fully remastered album and a second disc of 50 minutes of remastered and previously unreleased live material from 1972.