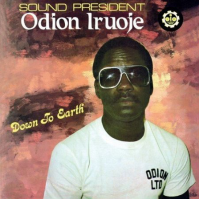 Soundway Records release the only LP by Nigeria's number-one producer of the 1970s and early '80s, 'Sound President' Odion Iruoje. Available for the first time since the 80s, it's limited to 1000 copies worldwide and is pressed on 180 Gram Vinyl. The album features a limited tip-on sleeve. Originally produced on his own label Odion Ltd and released in 1983, this over-looked and obscure LP was originally only ever distributed in small numbers back in the early 1980s. Iruoje is credited as being the man who signed Fela Kuti to EMI Nigeria and produced all of Fela's revolutionary early material from 1970-73. His first job upon being taken on by EMI Nigeria in 1969 was to be sent to London on a work experience placement at their London studios in St. Johns Wood. When he arrived he was pitched straight in at the deep-end, finding The Beatles deep in the recording of their Abbey Road album. He also signed and produced most of the great body of Nigerian material on the EMI label including BLO, Mono-Mono, Tunji Oyelana (who adds vocals on this LP), Ofege, Geraldo Pino, Sonny Okosuns and many many more. Part disco, part Nigerian rap, Afro-funk and Juju it's a unique and at times eccentric blend of Nigerian music that certainly deserves another look after all these years.