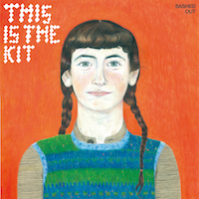 This Is The Kit is the much beloved musical project of Kate Stables, born in England and based in Paris. Bashed Out is her band's third album, the result of an extended period collaboration with the record's producer Aaron Dessner (Sharon Van Etten, Local Natives). Dessner--the co-founder of the Brassland label--is best known for his work in The National. Indeed, the backing band he gathered for Bashed Out combines the talents of This Is The Kit's touring members (Rozi Plain, Jesse Vernon, Jamie Whitby-Coles), alongside a number of session players drawn from the Brooklyn music scene: Bryce Dessner, Thomas Bartlett (Doveman, The Gloaming), Matt Barrick (The Walkmen) and Ben Lanz (Beirut, The National) all made key instrumental contributions.

This music is honest, human and humane: a folky-lovely slow-rumble. It's rock but of the hangover-friendly, stoner variety; it's folk but at a groovy speed. As notable as the music, however, is front woman Kate Stables, whose voice hearkens back to the classic singer-songwriter era--her distinctive, cutting vocals up front in the mix. It's a self-confidence gained since her previous album, 2011's Wriggle Out the Restless, which made her band a minor institution in the United Kingdom, especially on the radio which has embraced the group. This Is The Kit has received across the board support from BBC 6 DJs Lauren Laverne, Radcliffe & Maconie, Marc Riley, Cerys Matthews, and Mary Anne Hobbs--receiving further play from BBC Radio 1's Huw Stephens, Jen & Ally, and Phil Taggart. "Wonderful wonderful stuff," said DJ and Elbow frontman Guy Garvey, before arguing their last album should have made the Mercury Prize shortlist. The Line of Best Fit has already called This Is The Kit an "essential fixture of British folk music for the past 10 years...one of a handful of truly innovate songwriters working with the British folk template today."

In America, however, the band is just building up to their breakout moment. Bruce Warren, program director at influential American AAA station WXPN has praised Stables' "warm and gorgeous voice" and we expect similar notices to come across on this new LP. From Kate's earliest year growing up in the UK town of Winchester, she learned that great art takes time. "In some ways the place I grew up is defined by being a Roman Saxon medieval cathedral city," she explains. "They started building the Winchester Cathedral a thousand years ago and they've been working on it ever since." It's an exciting moment to join This Is The Kit's continuing musical evolution into a synesthetic, shape-shifting entity?rooted in folk but encompassing elements of psychedelia, alternative rock, and electronic textures and sensibilities.