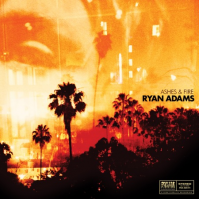 If Ryan Adams has been a blurred figure for some years – flitting between musical projects, distracted by temptations unrelated to music – Ashes & Fire brings his talent sharply back into focus. His 13th album since leaving Whiskeytown is understated and reflective, dominated by Adams' own acoustic guitar playing, with the merest wisps of percussion and arrangements of tasteful restraint. Invisible Riverside, a ballad that sounds as if it could have fallen off one of the better Rolling Stones albums of the 1970s, is as rockified as it gets, and then only because you can hear the snare drum being hit. The songwriting is fabulous throughout – Chains of Love feels like the kind of song that could support half a dozen arrangements, all equally wonderful, the one here taking its propulsion from acoustic rhythm guitar and kick drum, embellished with electric guitar arpeggios and swooping strings. Of course, it's not really a comeback, for Adams has never been away, but Ashes & Fire burns with purpose.