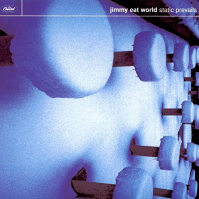 With their third album Clarity being one of the most overlooked masterpieces of 1999, Static Prevails is Jimmy Eat World paying their dues in 1996. It could be the slight over-production (a curse that has always haunted the band), being on a major label for the first time, or them trying to get a feel for pulling fancy studio tricks (i.e., numerous backing vocals, cellos, and Moog additions). Maybe it's all three, but what Static Prevails essentially lacks is the songwriting maturity that Jimmy Eat World could have perfected but it's almost as if the studio heads at Capitol wouldn't let them so that there would be more room for radio-friendly pop songs. In the end, nobody won. However, tracks such as "Anderson Mesa," "Call It in the Air," and "Seventeen" don't cross that line of boring alternative rock but remain in that aggressive pop status. Nothing close to classic, but definitely a sign of better things to come.