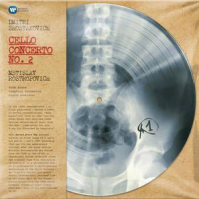 In the 1950s roentgenizdat - or X-ray publishing - became a trend in Soviet counterculture. 'Bone music' and 'rock on ribs' are two other terms that describe these bootleg recordings of music from the West, ingeniously cut onto X-ray film discarded by hospitals.This Record Store Day release carries an X-ray image of a spine and pelvis - and a 1967 recording that has its own underground history: when the great cellist Mstislav Rostropovich was exiled from the USSR in the 1970s, a resourceful Soviet archivist saved the original tape from destruction by hiding it in a mislabelled box. It is Rostropovich's world premiere performance of the Cello Concerto No. 2 by his teacher and mentor Dmitri Shostakovich, recorded live in the Great Hall of the Moscow Conservatoire with the USSR State Symphony Orchestra under Evgeny Svetlanov. This is its first release on vinyl.