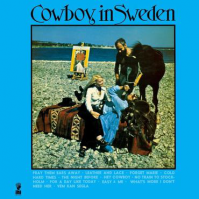 Light In The Attic Records continue its Lee Hazlewood Archival Series with this expanded reissue of Cowboy in Sweden. Released as the last LHI LP, Cowboy in Sweden was a soundtrack to the 1970 cult classic film of the same name starring Lee Hazlewood. The film was a surreal psychedelic account of Lee’s journey to his new homeland, while the soundtrack was a perfect compilation of Hazlewood’s strongest songs recorded over a prolific globe trotting three year period. The production scope of the album was the most ambitious of his career, recorded in Paris, London, Los Angeles and Stockholm with a slew of talented session musicians, producers and arrangers. Cowboy in Sweden is quite possibly the purest distillation of the Hazlewood sound; lush melancholy country pop with a pinch of humour (Pray Them Bars Away), a dash of bummer (Cold Hard Times), some beautiful ladies to sing with (Leather and Lace and Hey Cowboy) and even a couple anti-war protest songs to be topical (No Train to Stockholm and For A Day Like Today). The David Bitter Sweet Symphony Whitaker arranged orchestral pop of What’s More I Don’t Need Her and the stone cold Hazlewood classic The Night Before cement the album as Lee’s peak on LHI Records and ironically the label’s swan song.