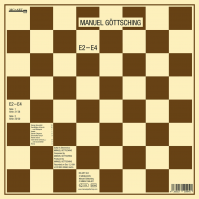 In anticipation of the 35th anniversary next year one of electronic music I#s most influential recordings, the legendary E2-E4, from 12.12.1981 gets an official rerelease by Manuel Goottsching on his own Label MG.Aart...Carefully overseen by the Master himself. One of the few records Gottsching released under his own name, 'E2-E4' has earned its place as one of the most important, influential electronic records ever released. What sets it apart from music that came before is a steadfast refusal to follow the popular notions of development in melody and harmony. Instead, E2-E4 continues working through similar territory for close to an hour with an application to trance-state electronics missing from most of the music that preceded it. Though the various components repeat themselves incessantly, it's how they interact and build that determines the sound - and that's the essence of most electronic dance music, that complex interplay between several repetitive elements. LP - 180 Gram, beautiful embossed Chess Board Artwork Print, inner sleeve with artist picture and text by David Elliott, Sounds June 16, 1984. CD Jewel Case With 8 pages Booklet, Pictures and Notes.