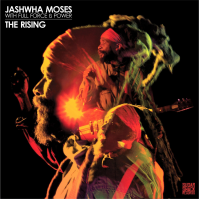 Having taken more than thirty five years to deliver his first original album,Jashwha Moses has taken heed of the overwhelmingly positive response from fans old and new and wasted little time in recording a brand new follow up to 2013's "No War on Earth". The new album titled "The Rising" continues to spread the Jahggae message with backing from Full Force and Power and the production side of things once more being undertaken by long term collaborator Mikey Hall. Having spent the last two years honing both his performance skills and his songs through a series of well received live shows, Jashwha's music has progressed and evolved yet, but still delivers roots music infused with his own blend of spirituality. Particular treats include the songs "Crazy (Version)" and "Nothing to Lose" where Jashwha utilises his falsetto voice to great effect. "Crazy (Version)" in particular, is very reminiscent of Junior Murvin during his classic Black Arkperiod which in itself is some compliment to Jashwha's singing ability and Mikey's production values.