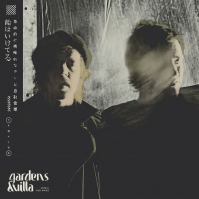 Music For Dogs is a deeply personal album on which Gardens & Villa pokes, prods, and even strangely celebrates the zeitgeist of music commerce, pleasure culture, technological advances and the new home they've found in Los Angeles. The New Age and Eastern Religion sentiments that rippled across their first two albums (2011's Gardens & Villa and 2014's Dunes) have been swapped out with a new sort of zen pop-Nihilsm. What's Nihilism anyway but Buddhism with a fuck-it attitude? They've found a way to live on the firing line, a way to actually harvest creative energy from our sad Internet tendencies, the uncertain future. "My whole life fixation/See if we can make it underneath the radar," goes the respective call and response of primary songwriters Chris Lynch and Adam Rasmussen on "Fixations," a song about the beauty in bottoming out and then finding the false bottom. Lynch could mean living as a creative in the underground or living outside peripheral view of the NSA. Under the stewardship of visionary producer Jacob Portrait and with irreplaceable rhythm section Dusty Ineman (drums) and Shane McKillop (bass), "Fixations" — and a great deal of Music For Dogs — is really just Gardens & Villa doing what it has always done best. G&V creates Byzantine melodies and richly interwoven arrangements for synths, guitars and vocals that work incredibly well on a cerebral level, but wouldn't upset a 3 a.m. pool party either.

The jaunty, jarring piano and bass that begin "Everybody" perfectly frame the song's anxiety-riddled themes of 21st Century voyeurism, surveillance and the turnstile of avatars intended to represent our true selves. "Everybody wants the new you/No one cares who you are," Lynch sings in a repeating chorus before the band collapses into a lovely out of time mall piano breakdown, which itself drops effortlessly back into the jaunty verse section. And the speedball ripper "Maximize Results" that begins the record is perhaps G&V's most ecstatic, vulnerable moment laid to record to date. It alone is worth the price of admission.