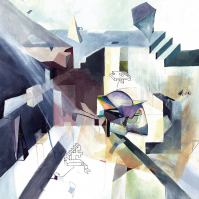 While on a writing retreat in the sleepy southern town of Benton, Mississippi, the members of New York's Ava Luna came across an abandoned house while on a walk through the woods. Overgrown, rotting, and littered with evidence of its past inhabitants, the maze-like dwelling would haunt their psyches throughout the writing and recording of their third full-length Infinite House. Like Borges' "Library of Babel", the seemingly endless rooms and hallways in the old house felt like a metaphor for the invisble, internal labyrinths, which the band explores lyrically and sonically on their new album. Self-recorded in Benton and at Gravesend Recordings, the Brooklyn studio run by drummer Julian Fader and vocalist/guitar player Carlos Hernandez, and mixed by Dave Fridmann (Flaming Lips, Spoon, MGMT), it is safely their most polished recording to date. But their trademark intensity, mirthful humor, and angularity remain resolutely in place, the burnished surfaces illuminating the stories beneath like never before. Working with Fridmann, Fader and Hernandez artfully employ the studio to further the album's preternatural vibe. As Hernandez explains "Dave Fridmann was able to augment this music in a really special way, removing it from the literal realm and putting it in a really psychedelic / fictional place." By questioning, or maybe just forgetting the rules of the real world, on Infinite House the band has grown beyond the "nervous soul" descriptor they've been tagged with in the past, delivering an album on which nightmarish moments can phoenix into revelations that help us reconnect with the surreal magic in our everyday lives. Of course, you don't have to dig into the intellectual concepts or references to love this album, or enjoy the band's twisted mystical perspective. On a very superficial level, these songs are sensual, vibrant, and fun