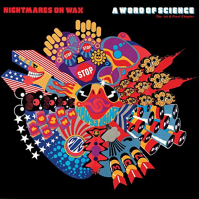 As the final part of the 'N.O.W. Is The Time' campaign celebrating 25 years of Nightmares On Wax, Warp presents double gatefold vinyl represses of the Nightmares On Wax back catalogue. All of the albums include printed inner sleeves and a download card for the full audio. Reissue of Nightmares On Wax's 1991 debut album. 'A Word Of Science' is the hardcore rave sound of the initial duo line-up of George 'E.A.S.E.' Evelyn and Kevin 'Boy Wonder' Harper. Contains the dancefloor anthems 'Aftermath', 'A Case Of Funk', 'Biofeedback' and 'Dextrous'. The original vinyl release of 'A Word Of Science' was a single LP which dropped three of the tracks included on the CD version. For this edition Warp have re-cut the album as a double LP for improved bass response and the missing three tracks ('B.W.T.M.', 'Sal Batardes' and 'E.A.S.E.') appear on vinyl for the first time.