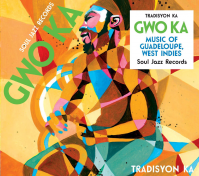 Soul Jazz Records continues its journey into the vast musical world of the Caribbean - digging deep into the cultural African roots of the region. Over the last 20 years Soul Jazz Records have been documenting and presenting the often hidden histories and deep musical worlds of Cuba, Haiti, Jamaica, Belize, Trinidad, the Bahamas and more.

This documentation encompasses reissuing lost recordings, such as the mighty Studio One catalogue of reggae, producing films/dvds (such as the 3-hour documentary Mirror To The Soul in conjunction with British Pathe, and Dub Echoes), books (check the forthcoming photography book on the Caribbean 90 Degrees of Shade, with text by Paul Gilroy, and Kanaval) as well as travelling to the region to produce new recordings.

Tradisyon Ka's Gwo Ka album is newly recorded in Pointe-A-Pitre, Guadeloupe by Soul Jazz Records. Like the cult music of Haiti's Vodou and Cuba's Santeria or the roots music of Belize's Garifuna (all of which Soul Jazz have travelled to record), Gwo Ka is the musical and cultural product of the region's African ancestry, forcibly brought to the Caribbean through slavery.

Gwo Ka exists only in Guadeloupe. Guadeloupe is a very different island from much of the Caribbean, in that it remains a 'department' of its original colonial master, France. Here, the currency is the Euro and the baker sells croissants and cafe au lait. This constant 'European-ising' of the island means that Gwo Ka plays a fundamental and important role in the defining of Guadeloupean identity. As an African-derived music, its position as a counter-balance to French influence means that the definition of how and what Gwo Ka represents is also in a constant state of flux.

In contrast to this ever-changing state of political and cultural definition, the music itself has no problems of identity. Drawing on hundreds of years of musical and cultural strength, the music of Gwo Ka remains both steeped in tradition and, at the same time, progressive and forward-looking. New melodies and compositions (all the songs featured here are new compositions) are performed over a long-established group of unique rhythm patterns played by master drummers (including playing with their feet!). In this African-derived song structure of call and response, the vocalist styles also draw from the equally powerful history of the French chanson singers to create a truly unique combination.

Tradisyon Ka, made up of some of the island's finest singers and master drummers, is part of a powerful network of politicised Gwo Ka groups on the island - upholding the traditions and cultural importance of Gwo Ka as part of a larger process of defining the identity of Guadeloupe and Guadeloupe culture.