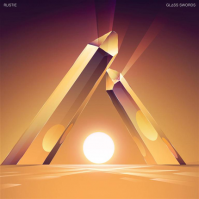 After taking shape in the studio over the course of the past two years, â€˜Glass Swordsâ€™ arrives, and as the otherworldly landscape of the album artwork suggests, it is epic and alien.

Glass Swords is almost entirely composed of dancefloor highs, a series of those hands-in-the-air peak-time moments that stick in the memory long after the rest of the night has turned hazy. Rustie constantly chases the next thrill, with rhythmic switch-ups and vivid synths firing in all directions as the album twists, turns and veers off at tangents; echoes of everything from early 90s rave and booty bass to Ginuwine's Pony (the belching bass of the aptly titled Ultra Thizz) indicate his own club tutelage. It's far from a scattershot ADD affair, though; fundamentally, Rustie has a knack for an irresistible hook, and for knowing when to stick with it and when to move on. He lands hammer blows of bass on Flash Back as a funked-up melody zigzags overhead; he cycles through the jabbing riff of Hover Traps in one sound after another, like a call-and-response among friends. "And you know I wanna ride out," croons fellow producer Nightwave on Surph, sounding utterly blissed out in the sweet shop of synths that surrounds her: by the time Glass Swords ends, she's singing for us all.